Saturday’s penultimate race of the season saw a series of horrific lap accidents after the safety car restarted, leading some drivers to be taken to hospital for precautionary checks.

After the events that led to a prolonged red flag period, the double coil restart was felt by many to be dangerous and was the main reason behind the three crashes that followed on lap six.

BMW’s Philip Inge has been the most important of all and has led to calls to drop the Indy-style restart procedure, saying drivers are simply too desperate to take advantage of it after periods of safety in the car.

“It was an absolute mess and we should really get rid of the Indy reboot,” the engineer said. “Well it’s the same start as we do with the start of a normal race but you’re in a different mindset as a driver because you know you’re only going to allocate places in the first lap after the restart.

“If there was a vote I would vote to restart one file because it doesn’t take any action away, but we are racing and there were no major accidents like we saw on Saturday. I’m glad everyone is fine because it looked so bad.

“I am also happy with myself because I was involved in both accidents, in the first turn when Nico Muller rolled me and I was right behind on the big turn. It was the first time in my career that I was a bit scared.” 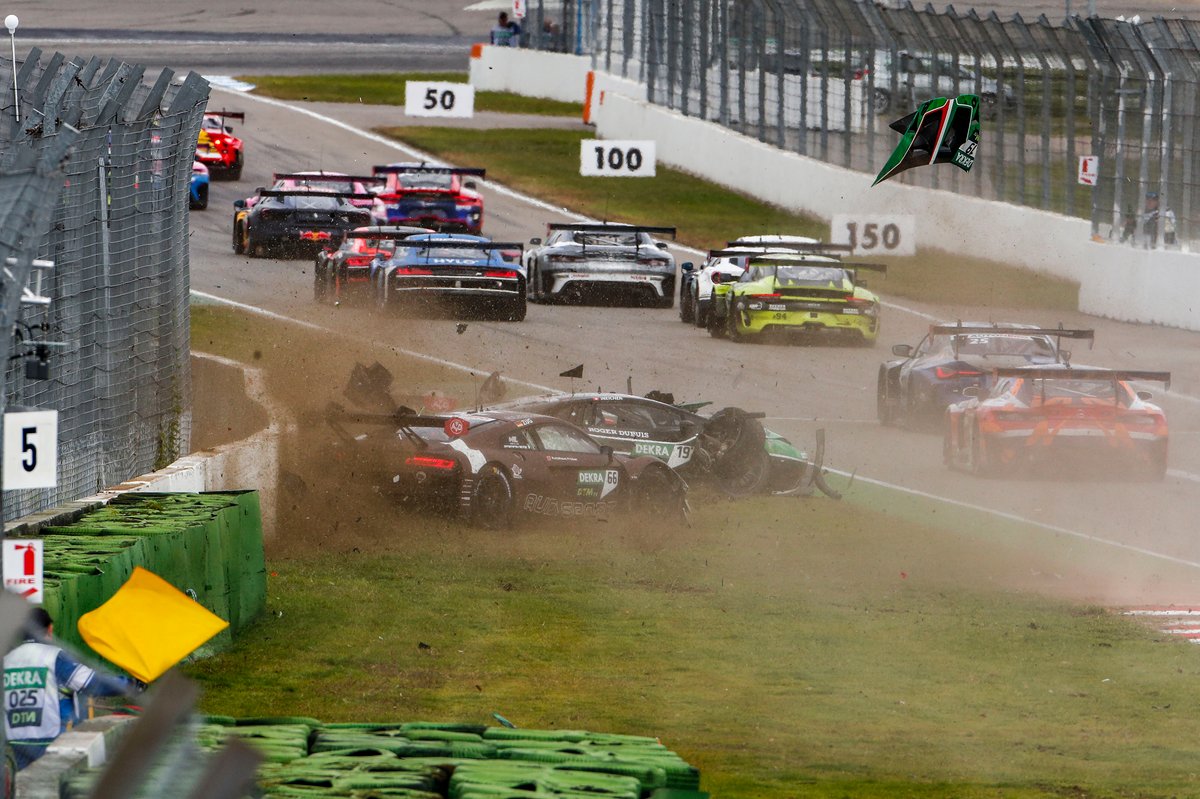 The first major crash occurred immediately after the race resumed on lap 6 as the drivers sped through Turn 1, which resulted in Rolf Inishment dumping his Lamborghini in a Marius Zug Audi before hitting the barriers.

Later in Turn 8, David Schumacher and Thomas Brenning were vying for position when they called, hitting the wall at great speeds before bouncing back onto the track.

This set off a chain reaction that ended with Ricardo Feller hitting Dennis Olsen’s rear, sending his car back first into the curbs. Such was the size of the conversion that the engine was thrown out of his Porsche and caught fire, crashing into the side of Nick Cassidy’s Ferrari before getting back on the track.

Seven drivers were disqualified from the race on Sunday due to damage to their cars, including Arjun Maini who had an unrelated crash at the original start. Doctors also declared Preining and Dennis Olsen unfit and would not be able to start the race even if they had a spare car.

BMW’s Sheldon van der Linde admitted there were many risks associated with a two-on-two formation, but felt that DTM should take the offer under consideration while deciding what is best for the series.

“Personally, I like it in the sense that it is useful for the fans and of course racing,” van der Linde said.

“But I think from a safety point of view it is sometimes very risky. We can get thousands and thousands of euros in damages for every car being fixed for tomorrow.

“You have to look at both sides and I think replaying the single file clearly shows that it’s a much safer way and that people don’t really share a lot of scraps because you’re not side by side.

“I think it was special today because it was obviously for the title fight and people are taking a lot of risks. But in general, I don’t know what is the best way but definitely we have to look at it in the future.”

Marco Wittmann, van der Linde’s BMW teammate, thinks it would be wrong to say that the second set of collisions were a direct result of the restart procedure as they occurred much further afield on the lap.

Instead, he feels that some of the 10 title contenders were too desperate to maintain their faint championship hopes, while others were simply eager to make an impression in the final round of the season.

“If we look for where the meltdown happened, it won’t happen right away when Indy restarts itself, or the start itself,” said the twice-champion Whitman. “They did the braking in T8, so obviously that’s not really related to starting or restarting in my opinion.

“I think the chaos mainly came from [fact] That there are still 10 men still fighting for the championship. 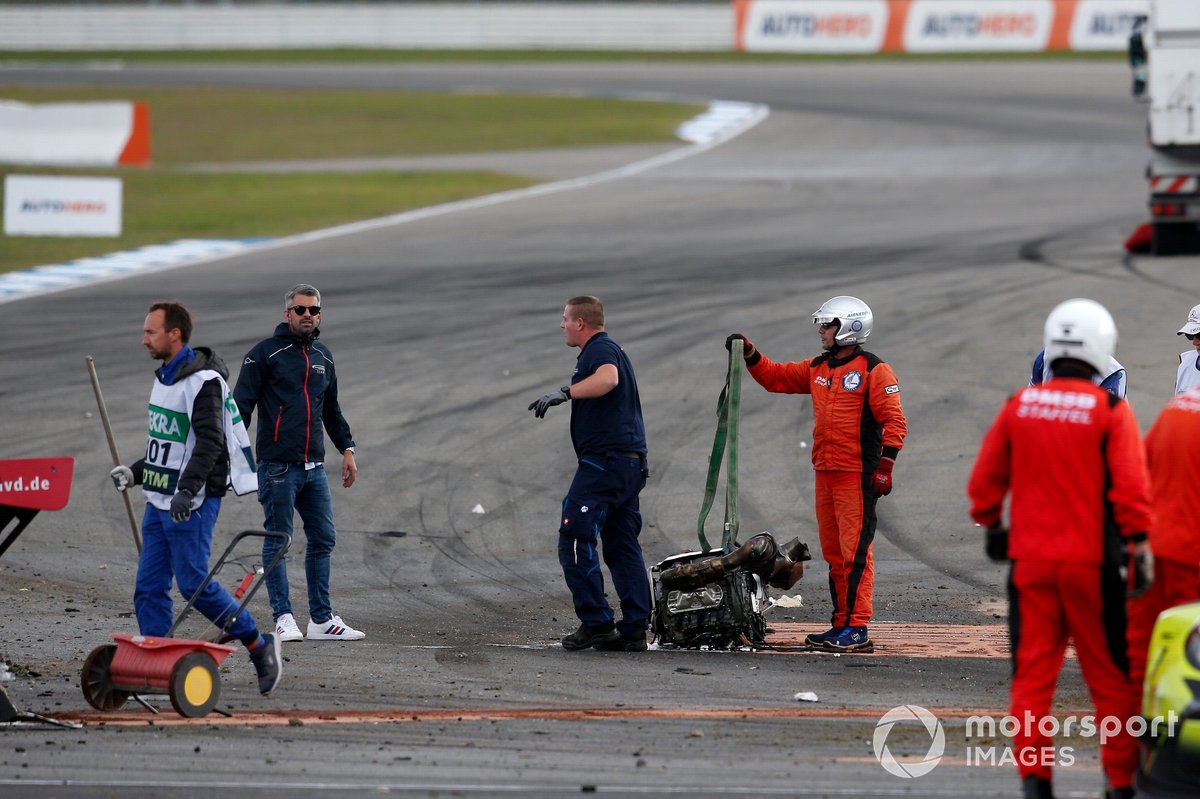 In a lengthy interview with the media just after Saturday’s race, DTM race director Scott Elkins echoed Whitmer’s suggestion that the restart procedure was not the main cause of the chaos that followed at Turn 8.

“The accident at Turn 8 had nothing to do with the double-coil restart. It may have happened in the first turn.”

“For me it was a very typical Turn 8 incident where something happened in the future and something else happened behind it and the players reacted. Olsen hit his brakes because he saw what was going on there and got hit from behind. It’s not anyone’s fault.

“I don “t think so [the double file restart] It was the wrong thing to do because that’s what we do. That’s how we race and honestly, I had a lot of confidence in rerunning the double coil here because we did a bunch of drills in [pre-season] a test.”

Elkins was quick to dismiss any suggestions that Indy-style restarts aren’t safe, and added that the DTM always has the option to use the single file action depending on the situation.

When the race resumed after a long red flag, race control chose the alternate single file option after a formation lap to allow the drivers a good understanding of circuit conditions.

“Double-coil restart is part of DTM DNA, it’s how we start,” he said. “I don’t think a double coil is insecure.